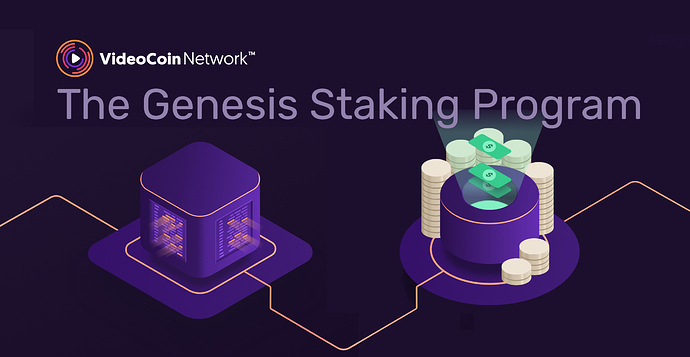 Today we are excited to announce a new, simpler method to stake on the VideoCoin Network. This new method, dubbed the Genesis Staking Program , will be available to stakers on June 25.

We initially announced the VideoCoin Network’s revolutionary staking program earlier this year. There was much interest in the unique model, but when the details emerged, many of our community wanted a simpler, more streamlined method to participate in the VideoCoin Network.

It is in that vein that we unveil the Genesis Staking Program .

Now staking and withdrawing are as simple as sending VID to a delegator address using a VideoCoin Staking wallet, to be released on 25th. This new pool, the VideoCoin Genesis Pool, is built to allow users to easily delegate tokens into this pool to help enable certain basic network functionalities and rewards users with VID tokens in return for staking into it.

Simultaneously, multiple third parties are also setting up worker pools on the VideoCoin Network. As such, the Genesis Staking Program is the first of many.

Unlike other worker pools whose rewards are based on video processing fees, this pool will reward users for staking tokens to enable certain basic functionalities on the network. This is an effort to broaden participation by simplifying the process for users to contribute to the network and earn VID tokens, which are non-inflationary.

Absolutely NOT. This is an additional method to run VID only payout pools.

2. Can anyone run a VID-only payout pool?

Yes, the software is open-sourced, and anyone can set up their own pool

3. You previously said you’ll not set up workers. What changed?

Workers will take time to come online on the VID network and we want to kick start this by setting up a worker pool to enable certain basic functionalities on the network. Our present plan is to keep this pool running for a year. We hope to end this pool at that point.

4. Will this give VideoCoin Pool an unfair advantage?

We will make sure that the worker direct stake is set at the minimum, so any other party can beat our pool with a higher direct stake + delegated stake combination.